skip to main | skip to sidebar

My creative space today is mostly about my summershop that I recently opened for the season. 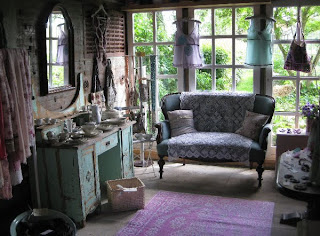 The carriage needed to be reorganized and a lot of cleaning was involved before the funny part - setting up the furniture and decorating with my wares - could begin! I love the sofa, my sweet neighbour Helen gave it to me as she had no use for it any longer, and the shape and duck egg blue colour add a good hint of boudoir to the atmosphere which I really like. Here are some more pictures: 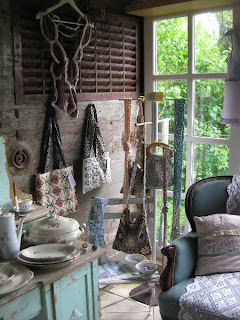 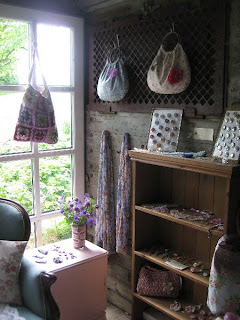 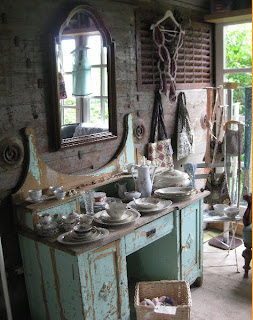 The peeling turquoise dresser looks gorgeous together with my selection of vintage china for sale! I even decorated the space outside the carriage with lots of flowers: 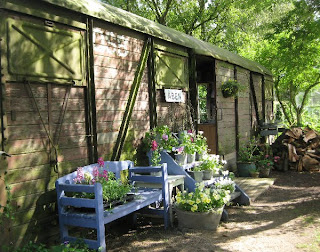 Although setting up the shop for the season took a lot of my time, I managed to get some work done. I made these summery bohemian textile bracelets: 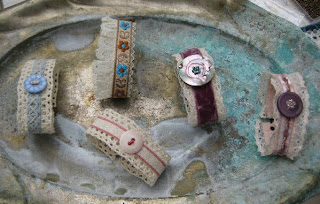 And I needed to make more button rings as they´re almost sold out, so here is a selection of button tops ready to be glued on to the ring base: 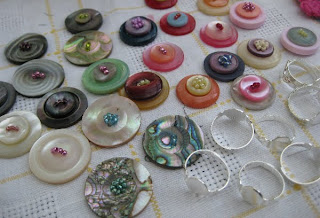 While I was sitting in the conservatory busy with crafting my wares, our sweet Norwegian forest cat Frida kept me company, taking a nap between my tins with threads and buttons ;-) 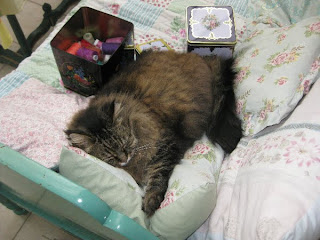 Don´t forget to pop around Kootoyos blog if you want to explore other Bloggers creative spaces!

I´m sorry for having been absent for such a long time, but things have been crazy around here for a while... Thank you all again for the good wishes for my old cat Frasse, but sadly he didn´t make it and had to be put to sleep.

But on a more merry note, spring has finally come and the garden is beautiful right now, so I used the blossoming fruit trees as a backdrop for some new shawls: 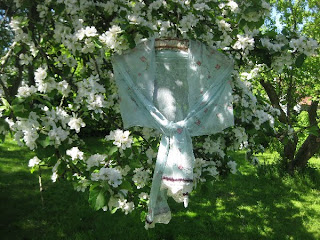 Here some more photos of our spring garden, taken a couple of weeks ago. This is our beautiful old beechtree with a flowerbed with lady´s mantle and roses in the foreground: 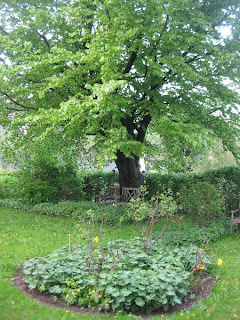 And here a peek into the vegetable garden with the greenhouse: 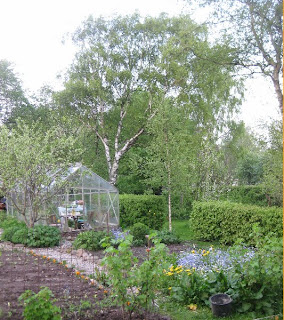 I´m happy to tell that my train carriage arrived a couple of weeks ago and was sound and safe put into place between the horse paddock and the beech hedge. It´s going to house my summershop and gallery, has direct access from the street and I´m sooooo looking forward to move in with my stuff - but there still is some work ahead before I can do so ;-) 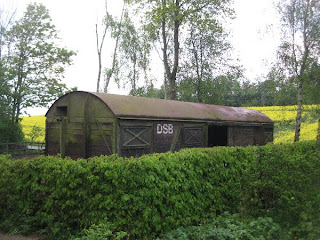 The proud owner in front of her "new" vintage train carriage! 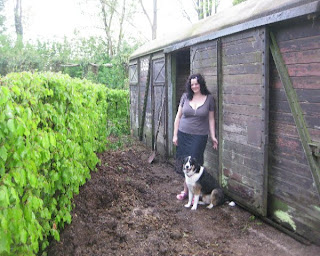 Along with the train carriage came a nest with 5 young blackbirds.... unfortunately without their parents.... we started to feed them with earthworms immediately after we had discovered them, but the next morning they had left the nest. We found one dead on the ground that hadn´t survived the jump, one in the nearby rapeseed field and another one in the shrubbery nearby the train carriage, the other ones we couldn´t find. We took the two birdies in, but the one we found in the shrubbery died later the same day. The other one is strong and healthy and we have nursed him for two weeks now, so he is rather tame: 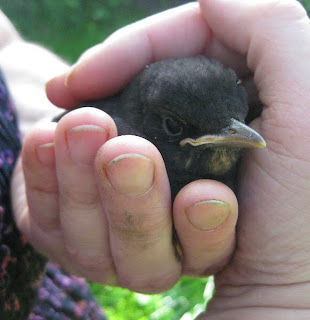 We take him out in the garden every day so he has the possibility to train his flying abilities, and he takes a round or two and then comes back to us.... very cute. He has started to look after worms and insects himself when being outside, so he is soon ready to be released into freedom. Here he came back from one of his rounds to sit on my knee: 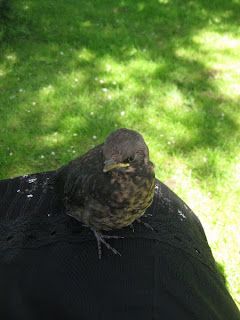 I even did a couple of exhibitions and markeds, the exhibition in Germany was great fun and I´m going to tell more about it next time and show some pictures. Last weekend I did a garden festival, and although the setting was beautiful and everything was well organized, it was disappointing... 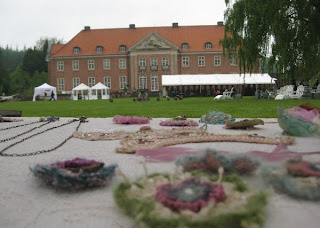 The first day it was so windy that my little tent was almost blown away, my shelves and rack for my shawls fell over many times and I spent most of my time either chasing my stuff because it had been blown away or collect it from the ground.... The next day it was raining (heavily raining!!) all day, so there weren´t too many visitors. My stall looked good I think, I had really made an effort to create the right atmosphere: 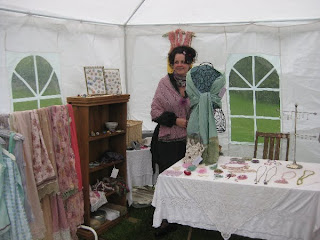 A big problem apart from the weather conditions was the fact that most of the visitors were simply not my target group, the audience was slightly older and I didn´t even break even (the costs for a stall were rather high), so I spent two days in wind and rain and cold for nothing...
But you have to try things, and soon I´ll open my summershop for the summer season which I´m really excited about!

This post is linked to the creative space group, and if you want to explore other Bloggers creative spaces please go to Kootoyos blog!

Fleur de Boheme
Århus, Denmark
Welcome to my blog! I am a textile and jewellery artist, running a combined vintage and craft shop in a converted wooden train carriage. I work with recycled materials like doilies, antique lace, old buttons, vintage haberdashery and jewellery which I find on my regular visits to fleamarkets and charity shops. I live in a pretty old farmhouse in the middle of the Danish countryside, together with my Norwegian partner and lots of pets. We have a big cottage garden, and as I believe in a sustainable lifestyle I grow vegetables, fruit and flowers and keep a flock of free ranging chickens. I love handmade stuff, a good gin tonic and I always wear dresses with flowers or polka dots.

Promote your Page too

This is a Flickr badge showing public photos and videos from Fleur de Boheme. Make your own badge here. 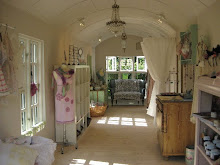 Add Glitter to your Photos